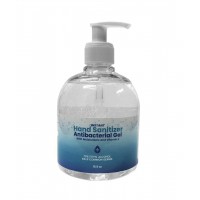 Hand Sanitizer Gel With Pump. Be ready for cold & flu season, put a stop the spread of..